We have to use Jupyter notebooks for Machine Learning at our university. Jupyter needs a lot of space on the hard disk and I was able to remember (from vocational school) that we were able to install PHPMyAdmin on a USB stick. You have a transportable web application on this way. I had this goal for Jupyter and the Python environment on Linux. 🙂

So I want to give you the installation guide for Jupyter on openSUSE Leap 15.1 (incl. Python) in a virtual environment.
Install the following packages as a foundation:

After that install the virtual environment with pip3:

Create a project directory for Jupyter in your home directory and mount the external disk/ USB stick there:

You have to umount /dev/sda1, if the disk has been mounted automatically in /run/media/ (in my case):

If the external disk is mounted, you can create the virtual environment for Python and Jupyter in the special project directory:

Call Jupyter via command line inside of the project directory then:

That will open your web browser with http://localhost:8888/tree.
Do you need additional packages or Python libraries? You can install them in this project directory, too.
Change to this directory and install them with pip3 (in my case these ML packages):

Enjoy Jupyter on an external disk.

Last semester I founded the AG Open Source at our university. We are organizing workshops and hackathons in cooperation with open source projects/ companies. Our students should learn more about open source development and how to contribute. The difference to the Friedrich-Alexander-University and their professorship in open source development is that we want to learn the real practice by professionals.

After 3 months we had a reputation. The AG Open Source should be open for other faculties, too. EFI (electronic – fine mechanics – information technology) has been interested for our events. So students in Computer Science and Electronics are receiving basic courses in Linux and using git. In addition, we create a program which is different every semester. Last semester we had topics like security and the ownCloud hackathon. This semester our focus is on monitoring and docker.

I am the Lead of the AG Open Source. I am educating other students in the student council for different positions in the AG. We need an additional lead. So I have one student as a Junior Lead who is being taught in organization, email writing and publishing by me. Two other students want to become Linux Trainers. They  have to know all about the cooperation with other  AGs in the student council and their processes, too.

Last semester I was the Linux Trainer in all Linux workshops. One (advanced) student supported me with running through the lines and looking for different students. Other students in my semester are interested for this job this semester, too. Last week we received the request for a Linux course for advanced Linux users parallel to the Linux course for beginners. So I am teaching one student to pick up my course for beginners. Next semester we’ll use 2 rooms for this event. I’m planning the course for Advanced Linux Users.

Since this week we are responsible for a new task at our university: Linux

A EFI student stood in the door of our student council for Computer Science and said: „I’m not from this faculty, but I need Linux support by the AG Open Source. Nobody else can help me. I was in the data center. They want to support only Windows. I can’t find anybody at our faculty, too.“

The data center has reconfigured eduroam. That’s the Wifi for students and professors. We need additional entries for Linux systems and a new certificate now. I configured his Wifi and I know: I have to educate Linux Supporters for our AG. On our internal homepage openSUSE and Android are listed as supported operating systems (Linux) by the data center, but our Sysadmins don’t know what to do there. All students are coming to the student council for Computer Science now, because they are receiving Linux workshops by us.

Our AG Open Source is growing, but our responsibilities are growing, too!

You create docker containers and many tools are missing. As an example: tcpdump

So I was looking for a solution for sniffing the traffic from outside of the container. It is recommended to setup an additional (tcpdump) container and to use it with following network connection:

You can specify different ports and save the data in a file. The id is the name of the container and the „–net=container:“ is saying that you want to have input/output traffic of the docker container like the command would be executed on the same system. 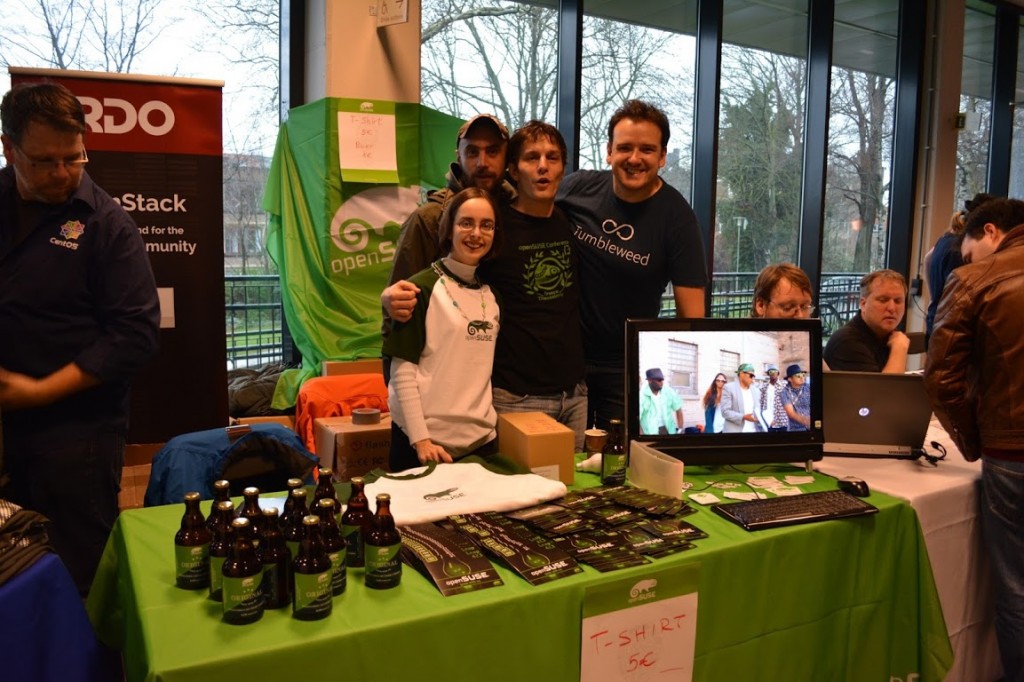 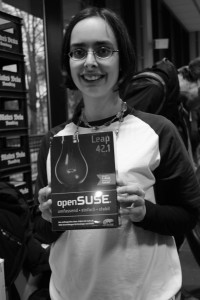